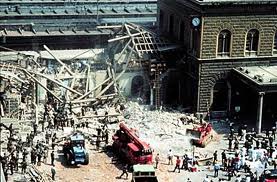 Today, 2 August is the anniversary of the Bologna railway station bombing in 1980, when the concourse and platforms were thronged with tourists and local people going on their annual holiday.  It as a low point in modern European history.  President Pertini wept at the scene.  Could it ever happen again?  I like to think not. Dobbiamo assicurarci che questo non accada mai più. Mai!